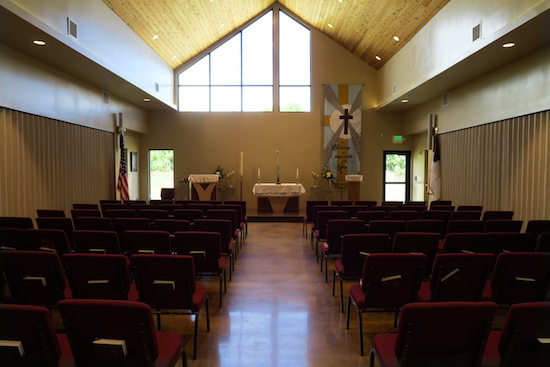 Lutheran worship is liturgical.  The word “liturgy” means “service”.  It is God’s service to His people in the form of His grace and Good News of salvation.  And it is the service where we respond with praise and thanksgiving for the gifts received.  Liturgy is a two-way conversation between God and His people.

The “ritualistic” aspect of Lutheran worship may be unfamiliar to some.  But all Christian churches make use of ritual, or “rite” for services such as weddings, funerals, baptisms, the Lord’s Supper, and the like.  Liturgical worship provides a sense of order and stability in the world that is often unpredictable and uncertain.

It may not seem obvious at first, but the Lutheran liturgy is nearly all directly quoted from the Bible.  At various points in the service, the congregation, choir or the pastor will chant Psalm verses or Scriptural songs.  Chanting enables God’s people to sing the exact words from the Bible that may not fit well into a conventional melody.

There are also spoken parts of the liturgy, such as short prayers prayed by the pastor (called collects), the Lord’s Prayer ( Matthew 5:9-13) and a statement of the Christian faith know as the creed.